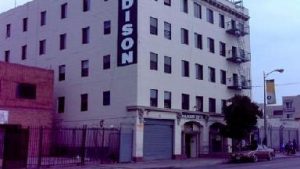 “Skid row is where people are mutilated and almost dead, they’re creeping, crawling, uncared-for creatures.” A bleak and depressing but truly fascinating documentary narrated by “The Poet Laureate of Skid Row” himself, Charles Bukowski, The Best Hotel on Skid Row focuses on the broken denizens residing in the Madison Hotel ($8.20 a night) in downtown Los Angeles. Those profiled include Becky, a heroin addicted prostitute; Gary, a loner and day laborer; John, a guitar player who stalks another resident named Debbie; and the alcoholic Jack Woodrow Wilson, who keeps his room spotless and considers the other residents “bums” and “garbage.” Part of HBO’s critically acclaimed America Undercover series, The Best Hotel on Skid Row was directed by Christine Choy and Renee Tajima-Pena, and produced by Peter Davis (Hearts and Minds). The film features music by Tom Waits such as “A Sight for Sore Eyes.” The running time is just 48 minutes. The directors reportedly read all of Bukowski’s books, starting with Ham on Rye, before embarking on the film. “We used to go down to Skid Row for fun like a break,” Bukowski once remarked in an interview. “Now for the people down there, there’s no way back … It’s sheer luck for the one in 1,000 who finally makes it out.” One of the interviewees, “Guitar John,” reportedly agreed to be interviewed in exchange for a bottle of Wild Turkey. The Best Hotel on Skid Row would make a great double feature with On the Bowery (1956). In a 1990 interview (Village Voice: The Westside Weekly), Bukowski remarked, “I did it for the money. Especially when I found out the subject matter. You know, being an ex-bum and having lived on Skid Row, I just fell into it. They said they needed a narrator and I said okay. We had a little struggle since I speak so slowly, to fit in with the time frame.”