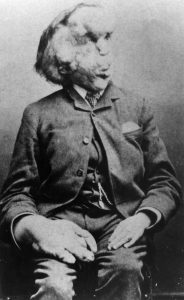 • Joseph Carey Merrick (aka the “Elephant Man” and often incorrectly referred to as “John Merrick”) was born in Leicester, England, to Joseph and Mary Jane Merrick on August 5, 1862.
• It is now believed that Merrick was afflicted with an extremely rare condition called Proteus syndrome, which did not become evident until he reached the age of 5.
• After Merrick’s mother died of pneumonia at the age of 11, he was treated cruelly by his father and stepmother. In fact, his father reportedly made him quit school and find a job.
• In addition to working briefly rolling cigars, Merrick later even tried selling gloves door to door. At the age of 17, he entered the Leicester workhouse system and stayed there for the next five years.
• Merrick reportedly often recounted his belief that his severe deformities were the result of his pregnant mother being somehow “terrorized” by a circus elephant at a fairground.
• It was allegedly Merrick himself who decided to contact showman Sam Torr (who later sold his interest in Merrick to exhibitor Tom Norman) so he could be put on display on the sideshow circuit as a way to make a living (he was billed as “Half-a-Man and Half-an-Elephant”).
• Dr. Frederick Treves displayed Merrick at an 1884 meeting of the Pathological Society of London. Merrick then returned to the sideshow, this time in Belgium after England banned his show.
• Merrick typically ended his letters with a portion of the poem “False Greatness” by English theologian Isaac Watts: “Tis true my form is something odd/But blaming me is blaming God/Could I create myself anew/I would not fail in pleasing you.”
• Although legendary British actress Madge Kendal probably never met Merrick (as depicted later in both the play and film versions of The Elephant Man), she did help to raise money for his support.
• Merrick spent the rest of his life at the Royal London Hospital, where he died (officially of asphyxia, but possibly of a dislocated neck) on April 11, 1890, at the age of 27.
• In 1923, Treves published a biography of Merrick called The Elephant Man and Other Reminiscences. It was Treves who for unknown reasons referred to Merrick as “John” in the book, causing later confusion about his real name.
• In 1971, notable anthropologist Ashley Montagu published The Elephant Man: A Study in Human Dignity (which later became the basis of the 1980 film version of Merrick’s life.
• A play by Bernard Pomerance called The Elephant Man premiered at the Hampstead Theatre in London in 1977. It later played at the National Theatre in London, off-Broadway at The Theater at St. Peter’s and on Broadway at the Booth Theatre with subsequent revivals over the years.
• Actors who have portrayed the lead role in various productions of The Elephant Man include David Schofield, Philip Anglim, David Bowie, Mark Hamill, Bruce Davison, Billy Crudup and Bradley Cooper.
• Legendary funnyman Mel Brooks served as (uncredited) coproducer of The Elephant Man (1980), which was directed by David Lynch (Eraserhead) and starred John Hurt as Merrick, as well as Anthony Hopkins, Anne Bancroft and John Gielgud.
• Hurt’s Elephant Man makeup took approximately seven to eight hours to apply and two hours to remove.
• In an interview with TimeOut London, Lynch remarked, “I always loved smokestack industry, and I love towns or cities that have grown up around factories. So here is Victorian England, and I don’t know this land, but I know factories, I know this is the beginning of the Industrial Revolution, so that side of it resonated with me. Then one day I’m standing in East London Hospital. A derelict hospital, but it still had beds in the wards. Thousands of pigeons, broken windows, but long, glorious hallways, fireplaces, all the details. I’m there in the hall looking into a ward and a wind entered me, and I was back in time. I knew it: 100 percent. Victorian England. And I said: ‘Now I know it. No one can take it away from me.’ It just came in.”
• The Elephant Man was nominated for a Best Picture Oscar, but lost out to Ordinary People (along with another black-and-white film, Raging Bull, as well as Tess and Coal Miner’s Daughter).
• Although the film was nominated for seven other Academy Awards, it did not win any (the “Best Makeup” Oscar was initiated the following year and awarded to An American Werewolf in London).
• In 1980, Michael Howell and Peter Ford published The True History of the Elephant Man: The Definitive Account of the Tragic and Extraordinary Life of Joseph Carey Merrick.
• It was Hopkins’ performance as Treves that reportedly convinced director Jonathan Demme to ask him to do “Hannibel Lecter” in The Silence of the Lambs (1991).
• American heavy metal band Mastodon included an instrumental track titled “Elephant Man” on their 2002 album Remission, followed by a similar instrumental track called “Joseph Merrick” on their 2004 album Leviathan.
• In 2004, American post-hardcore band The Fall of Troy released the song, “Whacko Jacko Steals the Elephant Man’s Bones” (at one time pop star Michael Jackson had reportedly tried to purchase Merrick’s bones from the Royal London Hospital).
• In 2013, actor Joseph Drake portrayed Merrick in two episodes of the BBC historical crime drama Ripper Street.
According to Atlas Obscura, the Royal London Hospital Museum displays several items related to the Elephant Man such as “a replica of Merrick’s skeleton, cap and burlap veil, some of his correspondence and a remarkable model of the Cathedral of Mainz, built by Merrick’s own hand.”