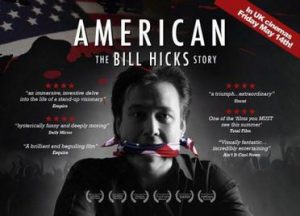 “Kicked ass. Took names. Changed the game.” Whether discussing Jay Leno pimping himself out for a Doritos commercial, American Gladiators, Barry Manilow albums, The Love Connection or the Waffle House, stand-up comedian, satirist and social commentator Bill Hicks (1961-94) brilliantly dissected the banality of American culture. “Think of me as Chomsky with dick jokes,” Hicks was fond of saying. A critically acclaimed, mind-blowing documentary directed by Matt Harlock and Paul Thomas, American: The Bill Hicks Story features great archival footage of classic Hicks performances interwoven with innovative “three dimensional photorealism” to document Hicks’ amazing life and stand-up career, along with insightful interviews with Hicks’ family, friends and fellow stand-up comedians. Sadly, Hicks died of pancreatic cancer in 1994 at the age of 32. The late, great Richard Pryor once remarked that Hicks was “an inspired and inspiring truth teller, dangerous and brave and scary all at once.” Tom Waits on Hicks: “Bill Hicks—blowtorch, excavator, truthsayer, and brain specialist, like a reverend waving a gun around. He will correct your vision. Others will drive on the road he built.” Hicks’ last performance on Late Show with David Letterman on October 1, 1993, was considered so outrageous by the show’s producers that they decided to censor the entire routine. Letterman invited Hicks’ mother, Mary, to the show on January 30, 2009, apologized for the appalling act of censorship and aired the entire routine.