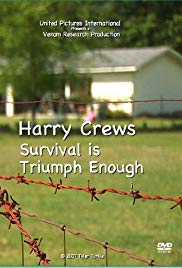 “I ain’t got a fuckin’ thing to hide.” Harry Crews (1935-2012) was interviewed by artist and filmmaker Tyler Turkle at his Gainesville, Florida, home in 2006 and 2007 – the result is this fascinatingly candid 30-minute documentary that covers the triumphs and tragedies of the legendary author of such critically acclaimed novels as The Gospel Singer, The Hawk is Dying, A Feast of Snakes, All We Need of Hell and others. Throughout the documentary, Crews remains brutally honest when assessing his life and work. The son of tenant farmers, Crews was born in Bacon County, Georgia (“Our main concern was finding enough food to keep our bellies from growing to our backbones”). He taught creative writing at the University of Florida for many years. A legendary hell-raiser, Crews admits in the documentary that he was “drunk every motherfuckin’ day for 30 years.” Somehow, even during the darkest periods of his life, Crews managed to keep churning out great fiction and his books have been variously labeled as “Southern Grotesque,” “Southern Gothic,” “Grit Lit” and “Redneck Macho.” All his novels are populated with freaks, lowlifes, misfits, lowers and psychopaths. By the way, Crews appears briefly in Sean Penn’s 1991 directorial debut, The Indian Runner, angrily singing “John Henry” as he is dragged away by police officers.