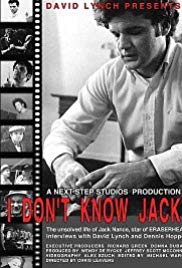 “From his childhood in Texas to his untimely donut shop death, discover the man behind the image through the colorful tales of those who knew him and loved him.” Best known for his iconic role as “Henry Spencer” in David Lynch’s 1977 cult film Eraserhead, Jack Nance (1943-96) made memorable appearances in several other offbeat Lynch productions such as Dune (1984), Blue Velvet (1986), Wild at Heart (1990), Twin Peaks (1990-91) and Lost Highway (1997). His diverse filmography included everything from Barfly (1987) to Meatballs 4 (1992). However, none of his bizarre roles (with the possible exception of Eraserhead) even come close to matching Nance’s strange, fascinating off-screen life as detailed in the documentary I Don’t Know Jack, which was directed by Chris Leavens and features interviews with family members, friends and colleagues such as Lynch, Dennis Hopper, Charlotte Stewart (who portrayed “Mary X” in Eraserhead) and Catherine Coulson (the “Log Lady” in Twin Peaks). Tragedy followed Nance everywhere and he frequently turned to booze to ease the pain, especially after his beloved wife, Kelly (an adult film actress who was the daughter of Jerry Van Dyke), committed suicide in 1991. Nance himself died under mysterious circumstances from injuries resulting from an alleged brawl outside a Winchell’s Donuts store in South Pasadena in 1996. Believe it or not, Nance auditioned for the role of “Perry Smith” that went to Robert Blake in In Cold Blood (1967) and the role of “Benjamin Braddock” that went to Dustin Hoffman in The Graduate (1967).