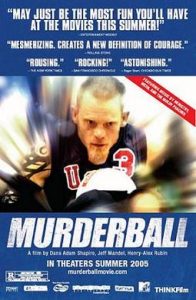 “We’re not going for a hug. We’re going for a fuckin’ gold medal.” An Academy Award nominee for “Best Documentary Feature” (but don’t let that scare you away), Murderball follows the U.S. quad rugby team as they prepare for the 2004 Paralympic Games in Athens, Greece. Call it Murderball, Quad Rugby or Wheelchair Rugby, this is a brutal, full-contact and highly competitive sport where opponents are frequently knocked to the floor. And off the court, the Team USA rugby players – including Andy Cohn, Scott Hogsett, Bob Lujano and Mark Zupan – shatter any and all stereotypes. A side plot involves a disgruntled former U.S. team member, Joe Soares, who now coaches the rival Canadian team. At one point, Zupan remarks, “If he were on fire, I wouldn’t piss on him to put it out.” Directed by Henry Alex Rubin and Dana Adam Shapiro, Murderball won the Sundance Film Festival Audience Award for “Best Documentary Feature” in 2005.