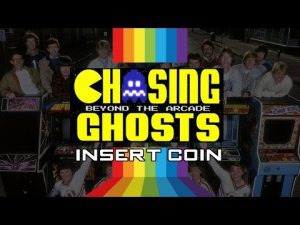 “If you couldn’t play a video game, you were nothing.” In 1982, some of the world’s best video game players gathered in Ottumwa, Iowa – the self-proclaimed “Video Game Capital of the World” – for a Life magazine photo shoot. Ottumwa was the home of Twin Galaxies, a video arcade owned by the eccentric Walter Day (he has a scruffy beard and wears this rather ridiculous looking referee jersey everywhere), the official scorekeeper for the video game industry. This very entertaining documentary, which was directed by Lincoln Ruchti, profiles the participants in the legendary photo shoot (one of the gamers refers to it as the video game “equivalent of the Sgt. Pepper’s album”!) and what has become of them since. Some of them grew out of their video game obsession, while others are still very delusional about their arcade accomplishments and quite creepy as well! The real star (and villain) of the flick is arrogant, mullet-adorned Pac-Man champ Billy Mitchell, who seems to generate controversy and resentment to this day among other hardcore video gamers. Mitchell seems to enjoy every bit of the notoriety. Chasing Ghosts premiered at the 2007 Sundance Film Festival. Both Mitchell and Day figure prominently in the other excellent video game documentary, The King of Kong: A Fistful of Quarters (2007).