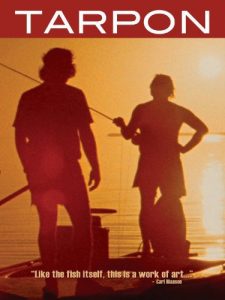 “Where It All Started.” Shot entirely in Key West and featuring appearances by Richard Brautigan (Trout Fishing in America), Thomas McGuane (Ninety-Two in the Shade) and Jim Harrison (The Road Home), as well as original music written and performed by Jimmy Buffett, Tarpon is much more than just your ordinary fly fishing documentary. In fact, author Carl Hiassen called the 53-minute documentary, which was directed by Guy de la Valdéne and Christian Odasso, a “long-lost gem” that “has acquired cult status in the fly fishing world … It has the most breathtaking footage of the tarpon-stalking experience that you’ll ever see. Like the fish itself, this is a work of art.” In a 2016 Men’s Journal interview, Buffett remarked, “One time, [Jim Harrison and I] worked on this Tarpon movie together, a fishing documentary from the ‘70s. Basically, we had no fucking idea what we were doing at the time, starting with the script. [Director] Guy de la Valdene had all the money and sent a crew that was all French. I speak French now, but I didn’t at the time, so there was a huge communication issue. So we’re in the Keys and taking out boats with [poet] Richard Brautigan and [novelist] Tom McGuane. It really captured the Key West of the ‘70s. It’s sort of a treasure today.”