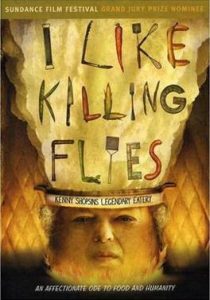 “I almost do better with assholes … It’s a very adversarial relationship with new customers … they have to prove it to me that they are okay to feed.” A truly offbeat and engaging documentary directed by Matt Mahurin, I Like Killing Flies profiles often profane and abrasive philosopher-cook Kenny Shopsin, the owner of Shopsins, a quirky Greenwich Village diner. Shopsin initiated a number of rules at this eatery that are strictly enforced such as no parties over four, no cellphones, etc. In addition, the diner’s menu features more than 900 items with colorful names like “Fat Darrell,” “Moby Chick,” “Pig Newton” and “Blisters on My Sisters”! The plot is virtually nonexistent – except for the fact that Shopsin loses his lease and ends up moving into a bigger place – but the real treat is listening to Shopsin’s often hilarious rants and words of wisdom on anything and everything. For instance, at one point Shopsin remarks, “The way that I choose to function is to pick an arbitrary, stupid goal, become totally involved in it and pursue it with vigor. And what happens to you in that pursuit is your life.” At another point he states, “The first duty of everybody in life is to realize that they’re a piece of shit. Selfish and self-centered and not very good. You’re willing to sacrifice 20,000 people in another country just so you can go to a Wings concert.” We also meet Shopsin’s family and (occasionally creepy!) regular customers. Highly recommended! Shopshins is now located in the Essex Street Market in Manhattan.