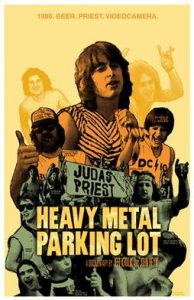 “Heavy metal rules! All that punk shit sucks. It belongs on fuckin’ Mars, man!” Every time I watch this hilarious underground classic billed as “the wildest rock ‘n’ roll documentary of all time,” I think of the quote by “Mick Shrimpton” (Ric Parnell) in This Is Spinal Tap (1984): “As long as there’s, you know, sex and drugs, I can do without the rock and roll.” Filmed by Jeff Krulik and John Heyn at the Capital Centre parking lot in Landover, Maryland, before a 1986 Judas Priest concert (with special guests Dokken), Heavy Metal Parking Lot is a 17-minute documentary short featuring “interviews” with a bunch of drunk and/or stoned metalheads. My favorite character is this totally trashed dude who looks like Steve Perry, sings a rough version of “Living After Midnight” and spouts such inanities as “Priest is bad, man, Priest is No. 1 in heavy metal, man, and who comes next … Iron Maiden, man.” The frequently bootlegged documentary was eventually released on DVD in 2006 with two hours of bonus footage (including a 1999 interview with “Zebra-Man,” the stoner responsible for the opening quote!) in celebration of its twentieth anniversary. The “Cap Centre” itself was demolished in 2002. By the way, the bootleg VHS version of Heavy Metal Parking Lot was reportedly a big favorite on the Nirvana tour bus.