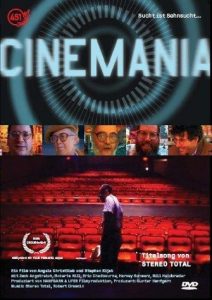 “Film is a substitute for life …” Directed by Angela Christlieb and Stephen Kijak, this totally fascinating, often humorous and slightly disturbing documentary follows the adventures of five totally obsessed movie buffs—Jack, Bill, Eric, Roberta and Harvey—who make their way from movie houses to film festivals throughout New York City catching up to five films per day, every day. It’s obvious that none of these individuals have lives outside of their incessant film watching and you initially wonder how they make a living until you find out that three are on disability benefits, one is receiving unemployment checks and the other has inherited money from a wealthy aunt. As Jack remarks, “The commitment to film ultimately entails a commitment to … a lifestyle on the margins.” Tattered books on film are stacked to the rafters of Jack’s tiny, squalid apartment. A total failure at establishing relationships with the opposite sex, Jack claims he would only make love to Rita Hayworth in black and white. Nebbish amateur philosopher Bill has an affinity for post-World War II European cinema, lives in near poverty, takes anxiety pills and survives on peanut butter sandwiches. Stating that “film buffs don’t socialize,” Eric lives in total squalor surrounded by thousands of poorly recorded videotapes that he watches over and over (none of the other cinemaniacs would dare watch a movie on videotape!). Eric admits that Audrey Hepburn’s death affected him more profoundly than the deaths of any of his relatives. Known as “the queen of cinemaniacs,” the cantankerous, obsessive-compulsive Roberta is a classic hoarder who collects anything free related to the movies she watches—including programs, fliers, press kits and promotional cups. Roberta once even tried to strangle a MoMA employee who ripped her ticket in half (she collects those too!) and was banned for life from the facility. The Rainmanesque Harvey memorizes the exact running times of movies and will watch just about any piece-of-shit flick out there “no matter how trashy, how bad.” In his 3-star review of Cinemania, Roger Ebert wrote “These are not crazy people. Maladjusted and obsessed, yes, but who’s to say what normal is? I think it makes more sense to see movies all day than to golf, play video games or gamble.” Bottom line: If you are at least a moderately compulsive film buff, you need to seek this one out!