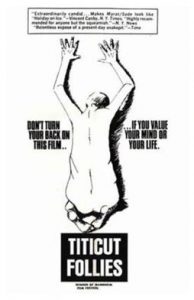 “Don’t turn your back on this film … if you value your mind or your life.” A fascinating (and extremely disturbing!) black and white documentary directed by Frederick Wiseman and filmed by John Marshall, Titicut Follies documents the mistreatment of patients at the Massachusetts Correctional Institution, a prison hospital for the criminally insane, Titicut Follies was banned in the United States after a ruling by the Massachusetts Supreme Judicial Court determined that the film violated the patients’ right to privacy. However, many critics believed that the film was removed from circulation by the Commonwealth of Massachusetts to protect its own reputation. Finally, in 1992, the film aired on PBS and is now widely available. Although Titicut Follies served as Wiseman’s directorial debut, he had served as the producer of The Cool World (1963), a semi-documentary film directed by Shirley Clarke.