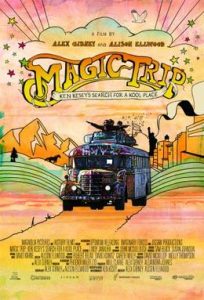 “We weren’t old enough to be beatniks and we were a little too old to be hippies.” In 1964, One Flew Over the Cuckoo’s Nest author Ken Kesey (1935-2001) and his Merry Pranksters took a legendary trip across the United States aboard a psychedelic bus (a 1939 International Harvester) nicknamed “Further” with none other than speed freak Neal Cassady (the real-life model of “Dean Moriarty” from Jack Kerouac’s classic 1957 novel On the Road) behind the wheel. This fascinating documentary directed by Alison Ellwood and Alex Gibney, which uses restored 16 mm color footage shot by Kesey and the Pranksters, follows the motley crew on their amazing, LSD-fueled journey to visit the New York World’s Fair during a pre-hippie era that definitely served as a harbinger of things to come. In addition to Kesey (AKA “Swashbuckler”) and Cassady (“Speed Limit”), the group included Ken Babbs (“Intrepid Traveler”), Kathy Casamo (“Stark Naked”), George Walker (“Hardly Visible”), Jane Burton (“Generally Famished”) and John Babbs (“Sometimes Missing”), among others. Stanley Tucci provides the rather sparse narration. The documentary includes some rare footage of Jack Kerouac and Allen Ginsberg hanging out with the Pranksters in New York City, as well as the Pranksters’ notorious visit to Timothy Leary’s Millbrook Estate in upstate New York. According to Gibney in an interview, “The [Leary] encounter is kind of a bust … It was supposed to be the West Coast acid heads meet the East Coast acid heads. Well, the East Coast acid heads basically ran and hid when they saw the pranksters coming full of smoke bombs and tootling instruments.” A true artifact from the ‘60s!