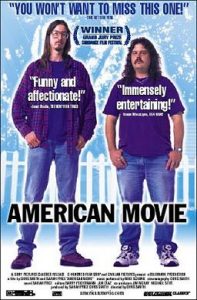 “This time it’s most important not to fail, not just to drink and to dream but rather to create and complete.” American Movie is quite simply a documentary about extremely low-budget filmmaking. Directed by Chris Smith, American Movie (subtitled The Making of Northwestern) is a demented Hoop Dreams for the drug-addled set. The main character, Mark Borchardt, is an obsessed filmmaker and he’s about as far away from Hollywood as you could possibly get—in this case, Menomonee Falls, Wisconsin. Borchardt’s main goal in life is to finish a full-length horror film titled Northwestern. It’s obvious that the opening scenes of Night of the Living Dead have heavily influenced this guy. He also credits Dawn of the Dead, The Texas Chainsaw Massacre, Phantasm and The Shining as major influences. If Borchardt is hanging out, he’s drinking beer; if he’s directing the movie, he’s got a beer in his hand (usually a can of Pabst Blue Ribbon); and if he’s taking a rare shower, he’s draining a beer. Borchardt’s determined to live out his own personalized version of the American Dream. To fund his masterpiece, Borchardt runs up credit cards, borrows from friends and relatives, and works a series of menial jobs—from delivering newspapers to vacuuming a mausoleum. His creditors are after him and so is the IRS. He doesn’t give a shit. So, he ends up dropping Northwestern to focus on a shorter film called Coven, a “psychological thriller portraying an alcoholic writer’s descent into the demonic abyss of a self-support group.” He figures if he can sell 3,000 “units” of the flick at $14.95 apiece he can raise enough money to finish his dream project. We also meet Borchardt’s Uncle Bill, the voice of reason and a principal investor for the film. Uncle Bill lives in a trailer but somehow has a $280,000 nest egg. One of the most interesting characters in American Movie is Borchardt’s friend, Mike Schank. This guy just doesn’t give a fuck about anything and he follows Borchardt around like some latter-day Sancho Panza. Schank spends his time playing the guitar, buying lottery tickets and helping Borchardt with his films. Both of these guys still sport Led Zeppelin T-shirts and have long, stringy hair. And they’re Green Bay Packers fans to boot. The final scene of American Movie is very revealing. It shows some of Borchardt’s old silent black-and-white film clips from the early ‘80s—the same friends racing around madly, drinking beer and raising hell. Nothing has really changed. By the way, American Movie won the Grand Jury Prize for Documentary at the Sundance Film Festival.