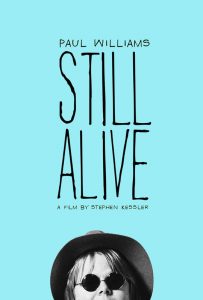 “I always thought he died too young …” If you were alive during the 1970s and watched any TV at all, you know that Paul Williams was practically everywhere. The diminutive (5-foot-2) singer-songwriter penned a slew of memorable hits such as “An Old Fashioned Love Song,” “We’ve Only Just Begun,” “Rainy Days and Mondays,” the Academy Award-winning “Evergreen” and “Rainbow Connection,” among others. He even appeared as “Virgil” the orangutan in Battle for the Planet of the Apes (1973), as “Swan” in the cult film Phantom of the Paradise (1974) and as “Little Enos Burdette” in Smokey and the Bandit (1977). An immensely talented and engaging personality, Williams also made frequent guest appearances on shows like The Tonight Show Starring Johnny Carson, The Gong Show, The Hollywood Squares, The Captain and Tennille and The Muppet Show, to name just a few. Then Williams, who struggled with drug and alcohol abuse, seemingly disappeared without a trace in the early 1980s. A lifelong fan of Williams, director Stephen Kessler (Vegas Vacation) embarked on a quest to find out what happened to his idol and the result is this fascinating, refreshingly honest documentary—often amusing and at times extremely moving—which premiered at the 2011 Toronto International Film Festival. At first Kessler feels like he is stalking a reluctant Williams (who has been sober since 1990) but eventually the two become friends (they both share an affinity for squid of all things) and Williams even invites Kessler to join him on camera. At one point toward the end of the documentary, Williams tell Kessler, “My life is pretty interesting right now and I got to tell you the last couple of years really fucked up the end of your movie … and I love that.” Rare clips from Williams’ many appearances are interspersed throughout the documentary—including a cringe-inducing appearance as guest host of The Mike Douglas Show where Williams is clearly high and extremely self-absorbed. Perhaps none other than Robert Blake summed up Williams’ enduring appeal best when he remarked in one of the old Tonight Show clips, “Honestly, man, you can’t say that Paul Williams has the greatest voice in the world, but when he gets up and sings, the people say ‘yeah, I know what you’re singing about and if you’re laughing while you’re singing I’m laughing and if you’re crying I’m crying,’ which is what I think art is really about.” By the way, Williams’ younger brother, Mentor, wrote the hit song “Drift Away,” most famously recorded by Dobie Gray in 1973 and Williams himself wrote the score for Bugsy Malone, the 1976 gangster musical, which featured an entire cast of child actors such as Jodie Foster and Scott Baio.