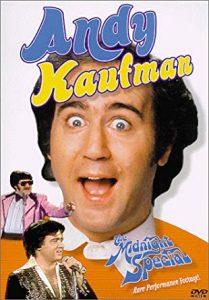 “While all the other kids were out playing ball and stuff, I used to stay in my room and imagine that there was a camera in the wall. And I used to really believe that I was putting on a television show and that it was going out to somewhere in the world.” Back in January of 1981, legendary comedian Andy Kaufman served as host of Wolfman Jack’s “legendary” rock ’n roll show. It’s all here: Elvis Presley impersonations, behind-the-scenes footage from Taxi, a unique brand of ventriloquism, bussing tables at Jerry’s Famous Deli, Tony Clifton abusing the audience, “It’s a Small World” complete with an ensemble of African percussionists and a duet with Slim Whitman. In addition, Freddie “Boom Boom” Cannon performs “Tallahassee” with Andy on congas. If you hate Kaufman’s offbeat form of comedy, I advise you to stay the hell away! By the way, The Midnight Special with Andy Kaufman would make a great double feature with My Breakfast with Blassie (1983).