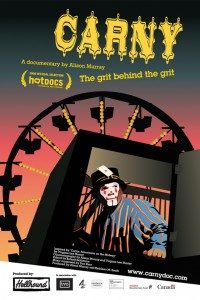 “I was born into this, so this is it.” A fascinating, uncompromising documentary from award-winning Canadian director Alison Murray in collaboration with photographer Virginia Lee Hunter (Carny: Americana on the Midway), Carny follows the lives of such colorful traveling carnival workers as “Hairy,” “Poochie” and “Bozo Dave the Dunking Clown” (AKA Dave Gaylon), the brother of famous Siamese twins Ronnie and Donnie. The film is full of poignant scenes such as Hairy describing her miserable childhood and Dave abandoning the carnival and taking on a routine 9-to-5 job due to his wife’s illness. In a 2008 interview with Filmmaker magazine, Murray remarked, “The carnys are typically a closed and wary bunch … Gaining trust was a matter of putting in the hours – over a year and a half hanging around the cotton candy machines and the balloon joints.” Murray admitted that the most surprising storyline that emerged during the filming of Carny was a “threesome relationship between a guy and two girls living in a 4 foot by 8 foot bunkhouse … Eventually someone had to go.” According to Hunter, “Many people find in the carnival a place of refuge, where they can seek their own personal redemption amongst all the bright lights. The characters that we followed emulate that.” By the way, Murray’s 2000 documentary Train on the Brain highlights the director’s odyssey as a modern-day hobo riding the rails across Canada.