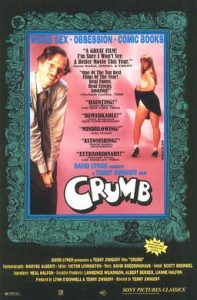 “How perfectly goddamned delightful it all is, to be sure.” Terry Zwigoff’s brilliant documentary delves into the strange and disturbing world of Robert Crumb. As the film opens, Crumb, complete with his trademark cheap suit, thick glasses and porkpie hat, sits cross-legged on the floor, listening pensively to a scratchy blues record from his extensive and rare 78-rpm album collection. We soon learn that bizarre and dysfunctional don’t even come close to describing Crumb’s family. Crumb himself describes his childhood as “grim.” He grew up in the “projects” of Philadelphia with his two brothers, Charles and Maxon, and two sisters (who wisely refused to be interviewed for the film). Their father was an “overbearing tyrant” and “sadistic bully,” while their mother was strung out most of the day on amphetamines. “My father was a rigid, gung-ho type who had a hard-ass attitude to life,” said Crumb. “All three of his sons ended up to be wimpy, nerdy weirdos. He wanted at least one of us to end up as a Marine. He always wore a fixed smile, which I later learned was a sign of deep depression.” The three brothers escaped into a fantasy world of comic books. “It was Charles who started the whole comic thing,” said Crumb. “He was totally obsessed.” Charles became fixated on the filmed version of Treasure Island and strolled around town dressed like Long John Silver. “He was much cleverer and funnier than I was,” admits Crumb. However, it becomes obvious that Charles was never equipped to deal with the real world. “Teachers hated him; kids hated him,” said Crumb. After high school, Crumb took a bleak job at American Greeting Cards before entering the radical world of underground comic books. He puts an end to the rumors that he hung out with the Grateful Dead during the ’60s. “I never had anything to do with those guys”, he said. “I hated their music. I went to some of their concerts and fell asleep.” Crumb did make frequent trips to San Francisco’s Haight-Ashbury district, looking “to get some of that free love action,” but without any success. However, the most memorable scenes in the film revolve around Crumb’s visits to his brothers, both of whom have artistic talent but have been trapped by their mental illnesses. Charles is a recluse who has lived at home with his mother since he graduated from high school. Blankets cover all of the windows and tattered paperbacks line the walls. Charles sits in his pajamas all day in a dark upstairs bedroom, taking antidepressants, contemplating suicide (once he tried to kill himself by downing a bottle of furniture polish) and rereading novels from old Victorian writers “because there’s nothing else to do.” According to Crumb, Charles’ drawings began to show “increasing alienation” during his late teens and then the drawings disappeared completely, replaced by pages and pages of rambling, incoherent text. His last comic drawings were of “psychotic bunny rabbits.” During a rare moment of candor, Charles reveals that he has always suffered from an “excessive degree of narcissism,” which eventually led to homicidal tendencies. Jealous of Crumb’s success, Charles was overcome with a desire to go down to the basement, get an ax and bash Crumb’s skull with it. We discover later that Charles took his own life with an overdose of medication a year after the interview was filmed. Maxon, who suffers from epileptic seizures, lives in a cheap hotel in San Francisco. When he is not out begging on the streets, Maxon spends his day painting Picasso-like artwork, sitting on nails and running cloth through his intestines. Although he doesn’t seem to care one way or the other, Crumb has gained a level of mainstream acceptance.  However, the documentary makes it clear that Crumb is totally uninterested in money; he has simply used art as a vehicle to avoid falling in his brothers’ footsteps. “People now don’t have any concept that there was ever a culture outside of this thing that was created to make money,” Crumb said. “Whatever is the biggest, latest thing, they’re into it. You get disgusted after a while at humanity.” As the film closes, Crumb and his family prepare to move from their humble bungalow in Winters, California, to a remote village in southern France. Further isolation, yes, but still clinging precariously to his sanity. Believe it or not, the late art critic Robert Hughes called Crumb “the Bruegel of the last half of the 20th century.”