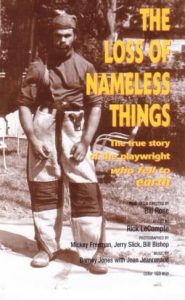 “You realize that what you’re looking at is someone with a piece missing … not someone who never had it, but someone who had it and it was taken away.” A fascinating and haunting documentary directed by Bill Rose, The Loss of Nameless Things focuses on the story of Oakley “Tad” Hall III (son of critically acclaimed novelist Oakley Hall), a promising, obsessively driven playwright and cofounder of the Lexington Conservatory Theater in upstate New York who suffered a devastating brain injury in 1978 after a mysterious fall from a bridge at the age of 28. What followed was years of drifting across the country, taking odd jobs, alcohol abuse and broken relationships. However, 25 years after the tragedy, a theater company staged the play, Grinder’s Stand (itself based on the bizarre death of Meriwether Lewis), Hall was working on the night he fell. Through interviews with friends, family and Hall himself, we take an amazing journey of loss, hope, redemption and rebirth. I like how Hall maintained his obsession with the life and work of French writer Alfred Jarry, best known for the absurdist drama, Ubu Roi. In an interview, Rose remarked, “Life is a mystery, which we live. If this film can in any way deepen our sense of wonder in that mystery, then it has done its job.” Hall, who authored a novel, Jarry and Me: The Autobiography of Alfred Jarry, died of a heart attack in 2011. By the way, Jarry died of tuberculosis in 1907 at the age of 34. His last words were reportedly, “Bring me a toothpick.”