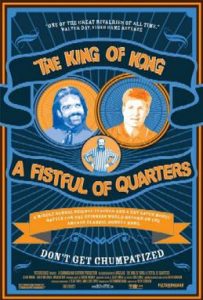 “I wanted to be a hero. I wanted to be the center of attention. I wanted the glory, I wanted the fame. I wanted the pretty girls to come up and say, ‘Hi, I see that you’re good at Centipede.’” Humble Donkey Kong challenger, Steve Wiebe, battles longtime Donkey Kong champion, the smug, arrogant Billy Mitchell, for the world record high score. Meanwhile, video game statistician and “world-renowned expert” Walter Day of Twin Galaxies (which keeps track of video game records) referees the action. A totally fascinating documentary that looks at video game geek culture, The King of Kong: A Fistful of Quarters was directed by Seth Gordon (believe it or not the same guy responsible for the execrable Vince Vaughn comedy Four Christmases) and premiered at the 2007 Slamdance Film Festival. The tagline read “In the cutthroat world of Donkey Kong, only one can rule.”