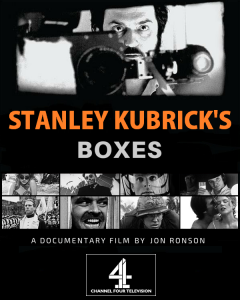 “… the gaps between releases of new films got longer … and longer. What was he doing?” A few years after Stanley Kubrick’s death in 1999, Welsh author, journalist and documentary filmmaker Jon Ronson was granted unprecedented access to the legendary director’s immense archive of research material related to his later films, primarily Barry Lyndon (1975), The Shining (1980), Full Metal Jacket (1987) and Eyes Wide Shut (1999) –  approximately 1,000 boxes in all! Ronson journeyed to Kubrick’s estate, “Childwickbury Manor,” and discovered boxes stacked everywhere. The boxes include a wealth of memorabilia such as photos, production notes, audition tapes, film out-takes, research documents and fan letters. Stories of Kubrick’s perfectionism and attention to detail abound, so it is no surprise that he kept a file of “crank” letters (Ronson even interviews a writer of one such letter). Ronson also interviews Kubrick’s family, along with friends and associates (including Kubrick’s longtime personal assistant Tony Frewin). In addition, Ronson uncovers mountains of research related to some of Kubrick’s unrealized projects such films on both Napoleon and the Holocaust (which was to be based on Louis Begley’s 1991 novel Wartime Lies). Bottom line: Stanley Kubrick’s Boxes is a must-see for both hardcore Kubrick fans and film buffs alike.