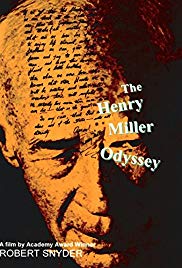 “To laugh at yourself is the most important thing …” In Tropic of Cancer, Henry Miller’s semi-autobiographical novel, which was published in France in 1934 and banned in the United States until the 1960s, the author writes “I have no money, no resources, no hopes. I am the happiest man alive.” Directed by Robert Snyder, The Henry Miller Odyssey captures the essence of Miller as he reminisces about his childhood in Brooklyn, reads passages from his works and revisits his old haunts in Paris, where he lived in poverty and made lifelong friends with many artists and writers, including Anais Nin, Alfred Perles and Lawrence Durrell (the two old buddies have a fascinating discussion about suicide). The Henry Miller Odyssey would make a great double feature with Henry & June (1990), the first film to receive an NC-17 rating.