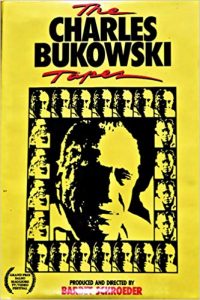 “You lose what individualism you have, if you have enough of course, you retain some of it, but most don’t have enough, so you become watchers of game shows, y’know, things like that. Then you work the 8 hour job with almost a feeling of goodness, like you’re doing something, and you get married, like marriage is a victory and you have children like having children is a victory, but most things most people do are a total grind, marriage, birth, children, it’s something they HAVE to do because they have nothing else to do. There is no glory in it, no esteem, no fire … I could not accept the snail’s pace 8-5, Johnny Carson, Merry Christmas, Happy New Year, to me it’s the sickest of all sick things.” Director Barbet Schroeder taped a fascinating compilation of interviews with Charles Bukowski in preparation for the filming of Barfly. The Charles Bukowski Tapes features a collection of 52 improvised monologues with Bukowski that together run more than four hours long. According to Schroeder, these monologues were “as beautiful, powerful and funny as his writing, and always related directly to personal experience.” The Charles Bukowski Tapes presents Bukowski at his best, most drunk and absolute worst (in one disturbing segment he kicks his future wife, Linda Lee, off the couch in a fit of jealous rage!). Michael Wilmington of the Los Angeles Times called the video documentary “An outrageously stimulating and unnerving all-night drinking session with a gutter eloquent barroom philosopher . . . One of the most intimate, revealing and unsparing glimpses any film or video has ever given us of a writer’s life and personality.” According to Schroeder, “I couldn’t stand the thought of not being able to share the extraordinary evenings we spent together … I finally brought in a small crew, friends of mine, with a high quality video set up. Whoever was the least drunk took control of the camera.”