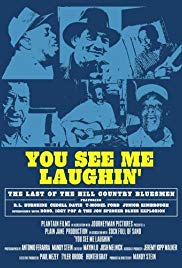 “I could really stomp some ass back then, stomp it good. I was a-sure-enough-dangerous man.” Directed by Mandy Stein, You See Me Laughin’ is a fascinating documentary that explores the rundown juke joints of rural Mississippi as we get a rare opportunity to visit with the last of the true Delta bluesmen such as R. L. Burnside, Junior Kimbrough, T-Model Ford, Cedell Davis, Johnny Farmer and Asie Payton. Subtitled “The Last of the Hill Country Bluesmen,” the flick also follows Fat Possum Records founder Matthew Johnson as he tries desperately to record these great blues artists, some of whom are living in the most desperate of circumstances, to say the least. Iggy Pop and Bono also get interviewed. Stein also directed Too Tough to Die: A Tribute to Johnny Ramone (2006) and Burning Down the House: The Story of CBGB (2009). You See Me Laughin’ would make a great double feature with Robert Palmer’s earlier blues documentary, Deep Blues (1991), which also boasts footage of Kimbrough and Burnside. Founded in 1992 and based in Oxford, Mississippi, Fat Possum Records, whose motto is “We’re trying our best,” has featured such legendary blues artists as Furry Lewis (1893-1981), Mississippi Joe Callicott (1899-1969), Mississippi Fred McDowell (1904-1972) and Charles Caldwell (1943-2003) in addition to the great musicians listed in the review above.