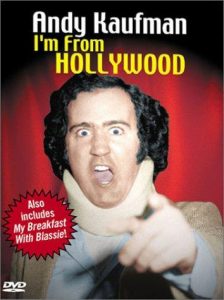 “I wanted to bring back the old days of the carnivals.” Best known as “Latka” in the TV series Taxi, Andy Kaufman saved his most bizarre material for his life off the set. First he declared himself “Inter-Gender Wrestling Champion,” challenging any and all women to try to pin him. He then initiated a feud with Southern champion Jerry “The King” Lawler that landed him in the hospital. Directed by Lynne Margulies and Joe Orr, I’m from Hollywood features Kaufman’s infamous appearance on Late Night with David Letterman, as well as interviews with Lawler, Robin Williams, Tony Danza, Bob Zmuda, Marilu Henner, Jimmy “The Mouth of the South” Hart and others. Believe it or not, during one stand-up routine, Kaufman baffled the crowd by insisting on reading The Great Gatsby—cover to cover! Bottom line: Kaufman was a true American original. I’m from Hollywood would make a great double feature with My Breakfast with Blassie in which Kaufman remarks, “The life of a part-time wrestler is no laughing matter. It’s not just fun and games like most people think. You work out, train constantly, push your body to the limit of endurance and nobody seems to care. I have wrestled and defeated over 400 women and what do I get? The men call me a wimp, the women say I’m a sexist pig.”