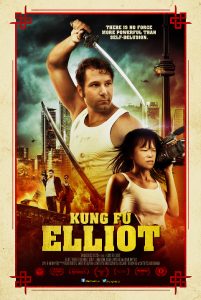 “There is No Force More Powerful than Self-Delusion.” A bizarre, often hilarious (and increasingly disturbing!) documentary directed by Matthew Bauckman and Jaret Belliveau, Kung Fu Elliot follows the travails of Elliot “White Lightning” Scott, who attempts to finish his extremely low-budget, unbelievably amateurish martial arts flick, Blood Fight, with delusional hopes of becoming Canada’s first true action hero. Living in Halifax, Nova Scotia, Elliot claims to have this amazing martial arts/kickboxing skill but his karate technique doesn’t seem to be any more refined than the talents of the average asshole on the street. Meanwhile, Elliot’s long-suffering girlfriend, Linda Lum, tries to figure out how much of his bullshit she can tolerate before dumping him for good (she seems to be his only means of support while pursuing his cinematic dreams). Is the whole thing a hoax as some critics have speculated? Who really cares – it’s thoroughly entertaining and highly recommended! In fact, Kung Fu Elliot would make a great double feature with American Movie (1999).