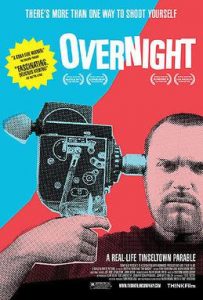 “As for my film career? Get used to it, cause it ain’t goin’ anywhere. Period.” Overnight traces the meteoric rise and fall of aspiring filmmaker Troy Duffy, a former Boston bartender who briefly hits pay dirt when Miramax Films options his sceenplay. During his meteoric rise and fall, this delusional megalomaniac ultimately turns out to be one of the most misguided and obnoxious human beings on the planet, at least according to point of view of this fascinating offbeat documentary from two of his disgruntled former friends and business partners, Tony Montana and Mark Brian Smith. After screwing up a movie deal and alienating just about all of his friends and family, Duffy somehow managed to go on to direct a surprisingly entertaining little cult flick called The Boondock Saints (1999) – which starred Sean Patrick Flanery, Norman Reedus, David Della Rocco, Willem Dafoe and Billy Connolly – as well as its less successful 2009 sequel, The Boondock Saints II: All Saints Day. The last shot of Duffy talking to himself as he wanders aimlessly outside a bar is truly disturbing. The movie’s tagline read, “There’s More Than One Way to Shoot Yourself.”