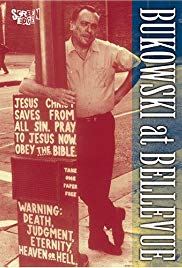 “You can do without a woman but you can’t do without a typewriter.” In the spring of 1970, Charles Bukowski gave a legendary poetry reading at Bellevue College outside Seattle, Washington, to an audience of mostly what appears to be bored, drug-addled and rather unreceptive college students. It was just Bukowski’s fourth reading and his nervous energy comes through on the Bellevue video even though he has his handy thermos full of booze with him to help dull the pain of making a public performance (which he hated doing and reluctantly agreed to do for the money). Bukowski most likely puked in the school’s parking lot before the reading as he did before just about every one of his subsequent appearances. One of the best poems Bukowski reads to the students is “Another Academy,” which compares the older and wiser subculture of bums (“men without”) with “the hippies and yippies” who “hitchhike in $50 boots.” In another classic, “Drawing of a Band Concert on a Matchbox,” the poet recalls sitting in his dirty kitchen and pondering the idealistic vision of a concert in a park drawn on a matchbox, complete with such images as a “concertmaster,” “rowboats,” a “boy with American flag,” a “lady in yellow with fan,” a “Civil War veteran” and a “girl with balloon.” He concludes that “life on paper is so much more pleasurable … there are no bombs or flies or landlords or starving cats …” The poet then imagines himself magically transported into the drawing itself, as he tries to score with the “lady in yellow with the fan.” Soon he imagines that he is having sex with her right there on the stove in his dirty kitchen. But reality, as always, rears its ugly head: “the balloon pops and I walk across the kitchen on a rainy day in February to check on eggs and bread and wine and sanity.” However, my favorite poem from the Bellevue reading is “The Night I Killed Tommy,” which would make Franz Kafka proud for its great mix of humorous and disturbing imagery. Although the quality of this 60-minute film is extremely crude (it was reportedly recorded by a two-man student camera crew and the entire video freezes up regularly), Bukowski at Bellevue is essential viewing for Bukowski fans. By the way, Bukowski (1920-94) is buried in Green Hills Memorial Park in Rancho Palos Verdes, California. His epitaph? “Don’t Try.”