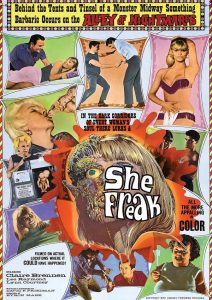 “Ladies and gentlemen, you’re about to behold a sight so strange, so horrifying, so utterly monstrous, that I urge you who are easily frightened or upset, who suffer from nervous disorders, weak hearts, or queasy stomachs, who experience nightmares, and any children under the age of 16, to forgo witnessing this exhibit. There are only two kinds of freaks ladies and gentlemen. Those created by God, and those made by man. The creature in this pit is a living breathing human being that once was… well, that’s another story that happened a long time ago, a long way from here. Look if you must.” – Carnival Barker, She Freak (1967)

The Unknown (1927)
“Men! The beasts! God would show wisdom if he took the hands from all of them!” A fascinating, bizarre and disturbing silent horror film directed by Tod Browning (Freaks), The Unknown features an outstanding performance by Lon Chaney as “Alonzo the Armless,” a circus knife thrower obsessed with the beautiful “Nanon” (Joan Crawford). However, Alonzo is hiding a dark secret – he’s actually a thief with the telltale deformity of two thumbs on his left hand and the whole “armless” act is a ploy to keep the police off his trail. In a desperate attempt to win over Nanon, Alonzo makes a horrific decision that backfires badly to say the least! The cast includes John George as Alonzo’s dwarf sidekick “Cojo” and Norman Kerry as “Malabar the Mighty,” another of Nanon’s suitors who she initially rebuffs. A double known as “Dismuki”—a circus performer born without arms, was used for several scenes, including the knife-throwing act. The Unknown would make an excellent double feature with The Unholy Three (1925), another great Chaney/Browning collaboration.

The Unholy Three (1930)
“That’s all there is to life. A little laughter … a little tear.” Totally offbeat sound remake of the 1925 silent classic (which was directed by Tod Browning), The Unholy Three once again stars Lon Chaney – “The Man of a Thousand Faces” – in his only talkie as well as his final film (tragically he died of a throat hemorrhage resulting from bronchial cancer less than two months after the film’s release on August 26, 1930, at the age of 47). Three sideshow performers and rather inept small-time criminals – “Professor Echo” the ventriloquist (Chaney), “Tweedledee the Midget” (a somewhat incoherent Harry Earles, reprising his role from the 1925 original) and “Hercules the Strongman” (Ivan Linow) – embark on a disastrous crime spree based out of a pet shop (not kidding!). They are joined by Echo’s pickpocket girlfriend “Rosie O’Grady” (the beautiful Lila Lee). Oh yeah, Echo also brings along his pet gorilla! Echo disguises himself in drag as “Mrs. O’Grady,” the grandmother who runs the pet shop, while Tweedledee acts the part of her baby grandson along with Hercules as her son-in-law. Meanwhile, the rather clueless pet shop clerk (and perfect dupe!) “Hector McDonald” (Elliott Nugent) falls in love with Rosie. After a jewelry theft leads to a murder, the gang begins to turn on each other. My favorite scene is the atmospheric sideshow at the beginning when all of the freaks are introduced (the fat lady known as “Ida from Idaho,” fire eater, sword swallower, Siamese twins, etc.) and Tweedledee starts a riot (believe it or not, he kicks a boy in the face after being taunted by the crowd!). Directed by Jack Conway, The Unholy Three was based on a 1917 novel of the same name by Tod Robbins (who also wrote the short story “Spurs” that served as the basis for Browning’s classic 1932 film Freaks). The film breezes by with a running time of just 72 minutes. I would definitely recommend watching both the silent and sound versions as a double feature. Earles went on to star as “Hans” in Freaks. Known as the “King of the Gorilla Men,” Charles Gemora appears (uncredited) as the gorilla. He also donned a gorilla suit in such films as Murders in the Rue Morgue (1932), Island of Lost Souls (1932) and At the Circus (1939), among others.

Freaks (1932)
“But for an accident of birth, you might be as they are.” Director Tod Browning (Dracula) delves into the depraved world of sideshow circus freaks to reveal that they have more humanity than the average asshole walking the streets. The last few minutes of this flick are truly horrifying and not for the squeamish. Freaks was based on a 1923 short story Spurs by Tod Robbins. Believe it or not, this masterpiece was released by MGM and only runs for a total of 64 minutes! Also released as Forbidden Love, The Monster Show and Nature’s Mistakes. The eclectic cast includes Olga Baclanova (“Cleopatra”), Harry Earles (“Hans”), Henry Victor (“Hercules”), Prince Randian (“The Living Torso”), Leila Hyams (“Venus”), Wallace Ford (“Phroso”), Daisy and Violet Hilton (“Siamese Twins”), Josephine Joseph (“Half Woman-Half Man”), Frances O’Connor (“Armless Girl”), Peter Robinson (“Human Skeleton”), Olga Roderick (“Bearded Lady”), Angelo Rossitto (“Angeleno”), Koo Koo, Schlitzie and Johnny Eck (“The Half Boy”), who once famously remarked, “If I want to see freaks, I can just look out the window.” Freaks would make a great double feature with Nightmare Alley (1947).

Nightmare Alley (1947)
“There he is, The Geek! . . . Is he the missing link? Is he man or beast? Some have pronounced him man. But beneath that shaggy mane of hair lies the brain of a beast.” Through sheer arrogance and stupidity, Stan Carlisle (Tyrone Power) devolves from a carnival barker known as “The Great Stanton” into a circus sideshow geek who eats the heads off of live chickens. Joan Blondell portrays “Mademoiselle Zeena.” Classic film noir, which highlights carny outcasts and explores the sleaziness and desperation of carnival life, also stars Coleen Gray, Ian Keith and Helen Walker. Directed by Edmund Goulding (Grand Hotel), Nightmare Alley was based on a novel of the same name by William Lindsay Gresham (1909-62), who also wrote Monster Midway: An Uninhibited Look at the Glittering World of the Carny (1954). Nightmare Alley would make a good double feature with Alisson Murray’s excellent 2007 documentary, Carny.

Chained For Life (1951)
The “Siamese Twin Genre” began with this study of the Hilton sisters, Daisy and Violet, who can also be seen in Tod Browning’s Freaks. The film begins with a documentary-style account of the twins’ daily lives but soon devolves into a sensationalistic murder trial. Strictly for fans of circus freak shows!

She Freak (1967)
“Behind the Tents and Tinsel of a Monster Midway Something Barbaric Occurs on the Alley of Nightmares.” I hate to recommend this extremely low-budget exploitation flick from legendary producer David F. Friedman too highly because you’re bound to be disappointed (in other words, watch at your own risk!). However, I find She Freak strangely appealing, perhaps because it was “inspired” by one of my all-time favorite films, Freaks (1932). That said, the film features mediocre acting and sets that look like they were pilfered from a cheap porno flick. In addition, literally half of the movie is padded with footage of carnies setting up and dismantling the midway. Claire Brennen stars in the title role as frustrated waitress “Jade Cochran” slaving away at a roadside diner (her boss, portrayed by Claude Smith, is known as “Greasy”—not kidding!) in the middle of nowhere who dreams of a better life … in a traveling carnival! After she gets a job as a food truck waitress, Jade sets her sights on sideshow manager “Steve St. John” (a rather wooden Bill McKinney who later appeared as one of the psychotic hillbillies in Deliverance). However, Jade soon discovers that she is totally appalled by the freaks in the sideshow, especially the nosy “Shorty” (Felix Silla, best known as “Cousin Itt” on The Addams Family). Even after marrying St. John, Jade continues her affair with sleazy Ferris wheel operator “Blackie Fleming” (Lee Raymond). After Blackie murders St. John, the freaks exact their revenge on Jade in a blatant rip-off of the Tod Browning classic. For the record, She Freak was directed by Byron Mabe and Friedman (who also wrote the screenplay) appears uncredited as the carnival barker: “Ladies and gentlemen, you’re about to behold a sight so strange, so horrifying, so utterly monstrous, that I urge you who are easily frightened or upset, who suffer from nervous disorders, weak hearts or queasy stomachs, who experience nightmares and any children under the age of 16, to forgo witnessing this exhibit.” Also look for the enticing Lynn Courtney in her only known film role as stripper “Pat ‘Moon’ Mullins.” Great movie poster, by the way—one of the best ever!