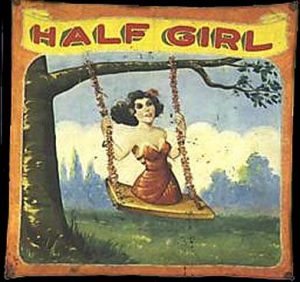 Today the works of legendary sideshow banner artist Fred G. Johnson (1892-1990) are considered top collectible items that auction for thousands of dollars (two of his banners even appeared on the hit TV show American Pickers). Born in Chicago, Illinois, in 1892, Johnson never received any formal art training. He worked for the United States Tent & Awning Co. as a teenager and quickly gravitated into the world of sideshow banners, which helped lure “marks” into parting with their hard-earning money to view freaks and other curiosities. Johnson’s distinctive sideshow banners were displayed by all the top circuses of the day such as Ringling Brothers, Barnum & Bailey and Clyde Beatty. His work also appeared at the Century of Progress Exposition at the Chicago World’s Fair in 1933. Although sideshow banners were typically 8 feet high, Johnson once created a 50-foot by 15-foot banner “for a bughouse.” Johnson used lead-based oil paints and churned out an average of four sideshow banners a day. Some of his classic sideshow banners include “Minnie Ha-Ha the Monkey Girl,” “Dickie the Penguin Boy,” “Josephine the Electric Girl,” “Albert the Rubber Skin Man” and “The World’s Strangest Married Couple,” among many others. Unfortunately, most of his classic sideshow banners have been lost or destroyed over the years. Some of his surviving sideshow banners were exhibited at the State of Illinois Art Center Gallery in 1989. Johnson died in 1990 at the age of 98 in Sun City, Arizona. Several of Johnson’s sideshow banners can reportedly be viewed at the Ringling Circus Museum in Sarasota, Florida, and the Circus World Museum in Baraboo, Wisconsin.