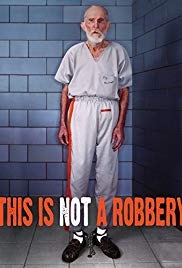 “I dumped the bitch and then I started robbing banks.” A fascinating documentary, This Is Not a Robbery traces the strange odyssey of J.L. Hunter “Red” Rountree (1911-2004) – the oldest (and arguably worst) bank robber in U.S. history – who was arrested and jailed several times, including for holding up a bank in Abilene, Texas in 2003 at the tender age of 91! I enjoyed how this 70-minute documentary, which was directed by Lucas Jansen and Adam Kurland, drifts back in forth along a timeline that explores how Rountree started out as a successful young businessman, hit a few major roadblocks in his pursuit of the American Dream (he developed a life-long hatred of banks after having to declare bankruptcy when a marina he invested in failed) and embarked on a criminal career in his late 80s. The turning point came around the time Rountree’s beloved wife of 50 years passed away and he started to drink heavily, hang out in strip clubs and even married a drug-addicted prostitute named Juanita (the couple even smoked crack together). A previously law-abiding citizen, Rountree committed his first bank robbery at the age of 86 in 1998 in Biloxi, Mississippi. He received a three-year prison sentence for his second bank robbery in Pensacola, Florida. And talk about brazen – Rountree would usually just pull up to the front of the bank in his car, enter the building undisguised and unarmed, and simply present the bank teller with an envelope that had “Robbery” scrawled on it. Rountree was usually apprehended quickly as in Abilene when one of the witnesses simply wrote down the license number of his 1996 Buick Regal. This Is Not a Robbery , which premiered at the 2008 Tribeca Film Festival, features interviews with Rountree, Juanita and his friends, as well as law enforcement officers, prosecutors and public defenders who dealt with his criminal cases. In addition, the documentary features some entertaining animated reenactments of his crimes.