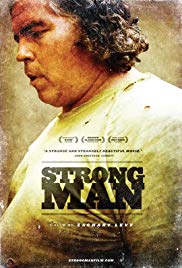 “I can bend bars and break chains, but you know, you can’t bend people.” This truly bizarre and totally captivating documentary highlights the rapidly diminishing “career” of aging strongman “Stanless Steel” (Stanley Pleskun), who travels the trade show/birthday party circuit bending pennies and steel rods, lifting trucks and other stunts for sometimes less-than-thrilled audiences (his day job involves hauling scrap metal). The film, directed by Zachary Levy, also delves into Pleskun’s personal life, including his complicated relationships with his long-suffering girlfriend Barbara (a former model who now struggles to provide some emotion while introducing Pleskun’s act), perpetually wasted brother and aging parents. Through it all, Pleskun plods ahead, seeking that one big break – with a growing awareness that time is not on his side. At one point, Pleskun even remarks, “Sometimes when it looks like you’re coming in first, you’re really coming in last.” In fact, there’s an overall sense of sadness and desperation among just about everyone who appears in this mesmerizing documentary, a realization that the American Dream is just beyond their grasp. Strongman was awarded “Best Documentary” at the 2009 Slamdance Film Festival.