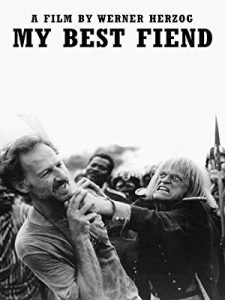 “Together we were like two critical masses … which made for a dangerous combination when coming in contact.” Werner Herzog vs. Klaus Kinski! A fascinating, revealing documentary by Herzog, My Best Fiend (Mein liebster Feind) features total insanity in the Peruvian jungle as the legendary German director of such classics as Aguirre, the Wrath of God (1972) and Fitzcarraldo (1982) explores his tumultuous relationship with the infamous wild-eyed, maniacal actor. At one point, Herzog threatens to shoot Kinski and then himself if the actor makes good on his repeated threats to walk off the Aguirre production. Herzog remarks, “Egocentric probably isn’t the right word. [Kinski] was a downright egomaniac.” In another instance during the filming of Fitzcarraldo, Kinski generates so much hatred among the local natives that they actually offer to kill the actor for Herzog. However, as insane as things got on the set, “The only thing that counted in the end was the result on screen,” according to Herzog. My Best Fiend also features interviews with several of Kinski’s costars, including Claudia Cardinale (Fitzcarraldo) and Eva Mattes (Woyzeck). In addition to Aquirre, the Wrath of God and Fitzcarraldo, Kinski starred in three other Herzog films: Nosferatu the Vampyre (1979), Woyzeck (1979) and Cobra Verde (1987).