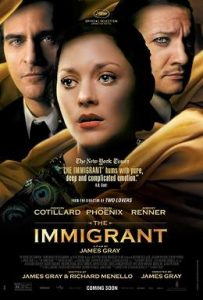 “I have gone through so many trials. Has it become a sin for me to try so hard to survive?” An unappreciated gem directed by James Gray, The Immigrant features an amazing performance by Marion Cotillard as Polish immigrant “Ewa Cybulska,” who takes desperate measures to try to rescue her ill sister, “Magda” (Angela Sarafyan), from her forced quarantine on Ellis Island in 1921. Ewa takes up with New York City burlesque theater owner and pimp “Bruno Weiss” (Joaquin Phoenix), who falls in love with her. Bruno runs a sleazy theater called the Bandit’s Roost and pimps out all his dancers, including Ewa. However, Bruno’s cousin, “Orlando the Magician” (Jeremy Renner) also becomes infatuated with Ewa and attempts to help her escape the clutches of Bruno. As you might very well expect, tragedy ensues. The film features strong performances all around, as well as amazing cinematography. Believe it or not, Gray has remarked in an interview that 80 percent of the film was “based on the recollections from my grandparents, who came to the United States in 1923.” According to Richard Brody of The New Yorker, “Gray presents the world of the Lower East Side prostitutes – their ‘pageant’ in a restaurant, their competition for Bruno’s favor, their neoclassical bathhouse straight out of Ingres, their backstage preparations at the burlesque show and the sad pomp of their onstage exhibitions, adorned with colors and expressions from Toulouse-Lautrec. He captures the whiplash wiles of hardscrabble underdogs and the bitterly ironic and violent ricochets as their schemes turn against them. All of this is enriched with psychological depths that ripple through the subtly unbalanced compositions.”