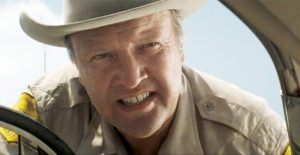 “I believe that I am in hell, therefore I am there.” —Arthur Rimbaud, Une Saison en Enfer

“The skylines lit up at dead of night, the air-conditioning systems cooling empty hotels in the desert and artificial light in the middle of the day all have something both demented and admirable about them. The mindless luxury of a rich civilization, and yet of a civilization perhaps as scared to see the lights go out as was the hunter in his primitive night.” —Jean Baudrillard, America

Years ago, when I first informed my boss that I was planning to move from South Florida to the Tar Heel State, he replied incredulously, “Haven’t you ever seen Deliverance?” He truly believed that North Carolinians spent most of their time traipsing through the woods barefoot, drinking moonshine and desperately trying to escape the wrath of sadistic hillbillies. Indeed, Deliverance is that rare film that has developed a lasting legacy of social significance—for better or worse—shaping many Americans’ impressions of the South for the past three decades.

THE AUTHOR
Although James Dickey is remembered in academic circles as one of the greatest poets of his generation, his fame today rests almost entirely on his poetic novel, Deliverance, published in 1970. Dickey claimed he wrote novels just to pay the bills. Born in Atlanta in 1923, Dickey played football at Clemson University but dropped out to join the Army Air Corps during World War II. He served as a radar operator with the 418th Night Fighter Squadron. After the war, he attended Vanderbilt University, where he earned a BA and MA in English. He married Maxine Syerson in 1948. After brief stints teaching at Rice University and the University of Florida, and serving in the Air Force during the Korean War, Dickey switched career paths and started writing jingles for a couple of big-city advertising agencies. Frustrated and bored with his new profession, Dickey turned to poetry (and booze!) as an outlet for the confining, banal world of corporate America. His first published volume of poetry “Into the Stone” appeared in 1960 for which he earned a whopping $114 in royalties. In 1966, he received the prestigious National Book Award in 1966 for his book of poetry “Buckdancer’s Choice.” Dickey did have his critics, however. For instance, fellow poet Robert Bly once called Dickey a “huge blubbery poet, pulling out Southern language in long strings, like taffy . . . a sort of Georgia cracker Kipling.” With success, Dickey started to live out the myth of the hard-drinking, foul-mouthed, womanizing poet – an attitude that only intensified after the astronomical success of his first novel, Deliverance. Only Erich Segal’s melodramatic Love Story kept Deliverance from reaching No. 1 on the bestseller list. In his revealing memoir, Summer of Deliverance, Dickey’s son, Chris, states: “My father was a great poet, a powerful intellect and a son of a bitch I hated . . .”

THE FILM
Dickey sold the rights to Deliverance to Warner Brothers Studio for a substantial sum that significantly supplemented his teaching salary at the University of South Carolina in Columbia. He was also given the task of writing the screenplay. Roman Polanski (Chinatown) was one of Warner Brothers’ first choices to direct the film. Dickey preferred Sam Peckinpah (The Wild Bunch). The directing job eventually went to English director John Boorman (Hell in the Pacific). The plot focused on four Atlanta businessmen who decide to take a weekend canoe trip down a whitewater river in Georgia and get more than they bargained for. Inbreeding, moonshine, hillbillies, a brutal rape scene and murder all factor into the equation. Filmed on location on the Chattooga River (which boasts a drop of 49 feet per mile), Deliverance starred up-and-coming actor Burt Reynolds as Lewis Medlock, Jon Voight (who had earned raves for his performance as Joe Buck in Midnight Cowboy), Ned Beatty as Bobby “Chubby” Trippe and Ronny Cox as guitar-pickin’ Drew Ballinger. Dickey was an intimidating presence on the set for both director and actors. Boorman claimed to have had “a turbulent and bruising relationship with Dickey during the filming of Deliverance.” The film, which was made for $2 million, became a box office and critical success.

TRIVIA
According to Dickey, the honchos at Warner Brothers didn’t exactly trust his screenwriting abilities: “One of them suggested that instead of four men making that boat trip, we could have two guys and their wives; then we could get some sex out of it. The next guy said we should have one married couple and one guy with his girlfriend; then we could get some illicit sex out of it. Another guy said the hillbillies should be Negroes so we could inject the race issue, and another said they should be drug-crazed hippies. The best one was the guy who suggested that we replace the hillbillies with Martians.”

The hit song, “Dueling Banjos,” was actually derived from a ’50s banjo tune called “Feudin’ Banjos” by Arthur “Guitar Boogie” Smith. In fact, Smith sued and was awarded royalties from the filmmakers.

The most famous local used in the film was Billy Redden, the retarded banjo player listed as “Lonny” in the credits. According to Christopher Dickey, Redden couldn’t even fake the banjo playing and “the scene was set up with Billy sitting on a kind of swinging bench, and another boy hidden beneath it, whose left hand up Billy’s sleeve was faking the fingerwork for the camera.”

The deer used in the scene where Ed goes hunting with his bow and arrow was so heavily tranquilized that it overdosed and died on the set.

The “squeal like a pig” scene was filmed in one take, a good thing since Beatty said he wouldn’t do it again. To this day, he won’t discuss that scene.

Reynolds foolishly insisted doing his own stunts and injured himself after going headfirst over a waterfall. Reynolds asked Boorman how the stunt looked. “Like a dummy going over a waterfall,” replied the director.

According to Christopher Dickey, Reynolds was so concerned about his image as a lady’s man that “even if no woman was at hand, that one day he came to the set in Tallulah Gorge with a handful of love letters written to him by women who’d slept with him. He passed them around to the crew for their reading enjoyment.

A movie poster promoting the film stated: “This is the weekend they didn’t play golf.”

In his autobiography, Burt Reynolds spoke disparagingly of Dickey: “I just couldn’t handle his act – his Jim Bowie knife on his belt, cowboy hat, and fringed jacket.”

Even though the film was a hit with most critics, Variety had this to say: “Deliverance can be considered a stark, uncompromising showdown between basic survival instincts against the character pretensions of a mannered and material society. Unfortunately for John Boorman’s heavy film of James Dickey’s first novel, it can just as easily be argued as a virile, mountain country transposition of nihilistic, specious philosophizing which exploits rather than explores its moments of violent drama.”

For a unique variation on the Deliverance theme, check out Southern Comfort about a group of inept National Guardsmen who ill advisedly decide to “fuck with” a band of Cajuns in the Louisiana bayou.

In 1001 Things Everyone Should Know About the South by John Shelton Reed, Deliverance is listed under the category of “Best Vicious Redneck Movie.”

CODA
Deliverance was nominated for Best Picture, Best Director and Best Film Editing—but ended up with nada. The film made Reynolds a star but he squandered his talents in a series of mediocre roles such as “J.J. McClure” in Cannonball Run (one of the single worst films in the history of American cinema). Voight made some bad choices as well, but has made somewhat of a comeback in recent years. Beatty established himself as a solid supporting actor in such films as Network, Superman and Back to School (although he also appeared in the dismal Stroker Ace with Reynolds). Cox always seems to turn up now and then as a villain, most notably in Total Recall. Boorman went on to direct Excalibur, The Emerald Forest andHope and Glory. As for Dickey, he turned into a parody of the hard-drinking writer, following in the footsteps of Hemingway, Fitzgerald and Jack London. After his first wife, Maxine, died in 1976, Dickey waited just two months before marrying Deborah Dodson, one of his students at the University of South Carolina. The quality of his work declined substantially. “I blamed Deliverance for what happened to my father and our family,”said Dickey’s son Christopher in Summer of Deliverance. “It seemed to me then and for a long time afterward that forces of self-indulgence and self-destruction, which were always there in my father but held in check, were now cut loose.” Dickey died at the age of 73 in 1997. He is buried in the All Saints Waccamaw Episcopal Church cemetery on Pawley’s Island, South Carolina.