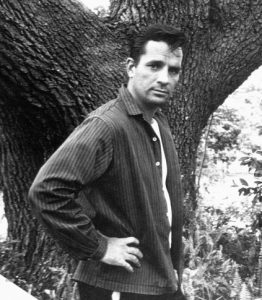 Number of Times Kerouac “Got Laid” While WWII Raged: 250

On the “Dulouz Legend”: “My work comprises one vast book like Proust’s . . . seen through the eyes of poor Ti Jean (me), otherwise known as Jack Dulouz.”

Last Lines, On the Road: “So in America when the sun goes down and I sit on the old broken-down river pier watching the long, long skies over New Jersey and sense all that raw land that rolls in one unbelievable huge bulge over to the West Coast, and all that road going, all the people dreaming in the immensity of it, and in Iowa I know by now the children must be crying in the land where they let the children cry, and tonight the stars’ll be out, and don’t you know that God is Pooh Bear? the evening star must be drooping and shedding her sparkler dims on the prairie, which is just before the coming of complete night that blesses the earth, darkens all rivers, cups the peaks and folds the final shore in, and nobody, nobody knows what’s going to happen to anybody besides the forlorn rags of growing old, I think of Dean Moriarty, I even think of Old Dean Moriarty the father we never found, I think of Dean Moriarty.”

Interests: “We love everything, Billy Graham, the Big Ten, rock and roll, Zen, apple pie, Eisenhower – we dig it all.”

On The Subterraneans: “. . . the book is modelled after Dostoevsky’s Notes from the Underground, a full confession of one’s most wretched and hidden agonies after an affair of any kind. The prose is what I believe to be the prose of the future, from both the conscious top and the unconscious bottom of the mind, limited only by the limitations of time flying by as our mind flies by with it.”

On the Beat Generation: “I want to make this very clear. I mean, here I am, a guy who was a railroad brakeman, and a cowboy, and a football player – just a lot of things ordinary guys do. And I wasn’t trying to create any kind of consciousness or anything like that. We didn’t have a whole lot of heavy abstract thoughts. We were just a bunch of guys who were out trying to get laid.”

On Beatniks: “It is not my fault that certain so-called bohemian elements have found in my writings something to hang their peculiar beatnik theories on.” “I am the king of the beats, but I’m not a beatnik.”

On Hippies: “The hippies are good kids. They’re better than the beats.”

Truman Capote on Kerouac’s Novels: “That isn’t writing at all; it’s typing.”

Small-Time Hustler & Drug Addict Herbert Huncke on Kerouac: “Kerouac was a typical clean-cut American type. He looked to me like the Arrow-collar man.”

Last Lines, Vanity of Dulouz: “Here’s the chalice. Be sure there’s wine in it.”

Cause of Death: Severe hemorrhage (brought on by mixture of Johnny Walker Red and Dexedrine pills) while watching The Galloping Gourmet at his house in St. Petersburg, Florida; according to death certificate, Kerouac died of “gastrointestinal hemorrhage, due to bleeding gastric varix from cirrhosis of the liver, due to excessive ethanol intake many years”

William S. Burroughs on Kerouac: “All writers lose contact. I wouldn’t say that he was particularly miserable. He had an alcohol problem. It killed him.”

Epitaph on Tombstone: “He Honored Life.”