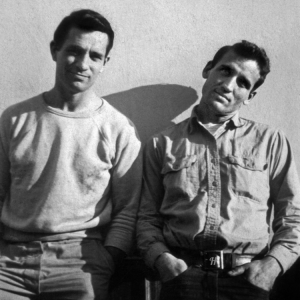 “The origins of the word ‘beat’ are obscure, but the meaning is only too clear to most Americans. More than mere weariness, it implies the feeling of having been used, of being raw. It involves a sort of nakedness of mind, and, ultimately, of soul; a feeling of being reduced to the bedrock of consciousness. In short, it means being undramatically pushed up against the wall of oneself.” – John Clellon Holmes, “This is the Beat Generation,” The New York Times Magazine, Nov. 16, 1952

“[On the Road] changed my life like it changed everyone else’s.” —Bob Dylan

“I was a high school kid and a wannabe beatnik! Rock & roll at that time was not respectable. I mean, beatniks didn’t like rock & roll … They liked … jazz [laughs]. You know: ‘Jazz, man. Dig it.'” —Jerry Garcia, 1993 Rolling Stone interview

“How frail, beat, final, is Tristessa as we load her into the quiet hostile bar …” —Jack Kerouac, Tristessa

“In my writing I am acting as a map maker, an explorer of psychic areas … a cosmonaut of inner space, and I see no point in exploring areas that have already been thoroughly surveyed.” —William S. Burroughs

“Art is good when it springs from necessity. This kind of origin is the guarantee of its value; there is no other.” —Neal Cassady

“In this modern jazz, they heard something rebel and nameless that spoke for them, and their lives knew a gospel for the first time. It was more than music; it became an attitude toward life …” —John Clellon Holmes, Go

“Those of us who flew out the door had no usable models for what we were doing … Though no warning would have stopped us, so hungry were we to embrace life and all of reality. Even hardship was something to be savored.” —Joyce Johnson, Minor Characters, 1983

In his inscription to Carolyn Cassady in The Town and the City, Jack Kerouac apologizes for getting drunk at Neal Cassady’s birthday: “it’ll never happen again.”

Lionel Trilling, letter to Allen Ginsberg, May 29, 1956: “I’m afraid I have to tell you that I don’t like the poems at all. I hesitate before saying that they seem to me quite dull, for to say of a work which undertakes to be violent and shocking that it is dull is, I am aware, a well known and all too easy device. But perhaps you will believe that I am being sincere when I say they are dull. They are not like Whitman—they are all prose, all rhetoric, without any music … There is no real voice here.”

Gregory Corso, Dedication for Gasoline: “I dedicate this book to the angels of Clinton Prison who, in my 17th year, handed me, from all the cells surrounding me, books of illumination.”

“The weight of the world is love …” —Allen Ginsberg

“As I grew older I became a drunk. Why? Because I like ecstasy of the mind.” —Jack Kerouac, Satori in Paris, 1966

Jack Kerouac letter to Allen Ginsberg: “I hitchhiked and starved, for art, and that makes me the Fool of the Beatniks with a crown of shit. Thanks, America.”

“Artists, to my mind, are the real architects of change.” —William S. Burroughs

“I wasn’t trying to be an outlaw writer … But we were all outside the law: Kerouac, Burroughs, Ginsberg, Kesey.” —Hunter S. Thompson

“She makes the scene/She reads Kerouac …” —Perry Como, “Like Young”

“… the only people for me are the mad ones, the ones who are mad to live, mad to talk, mad to be saved, desirous of everything at the same time …” —Jack Kerouac, On the Road

“During my convalescence a tall thin man came to see me, brought by a Tangier acquaintance. His name was William Burroughs, and he had just written a book entitled Junkie and sold it directly to a paperback company; this was the first time I had heard of anyone doing such a thing … His manner was subdued to the point of making his presence in the room tentative. I recalled having seen him before from time to time, walking in the street, not looking to right or left.” – Paul Bowles, Without Stopping, 1972

Weekend in Aintry! James Dickey and the Making of Deliverance