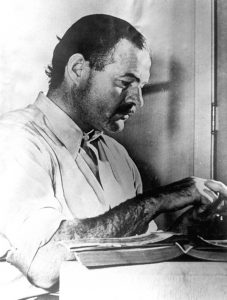 “The whiskey warmed his tongue and the back of his throat, but it did not change his ideas any, and suddenly, looking at himself in the mirror behind the bar, he knew that drinking was never going to do any good to him now. Whatever he had now he had, and it was from now on, and if he drank himself unconscious when he woke up it would be there.” – Ernest Hemingway, To Have and Have Not, 1937

As you wander through the streets of Key West, Florida, you cannot escape the legacy of Ernest Hemingway (1899-1961) around every corner (and frankly why would you want to?). The “Papa” Hemingway legend permeates Key West and the good news is that you can visit some fascinating landmarks that will help you get a sense of the world-famous author’s stint on the island during the 1930s before he packed up and moved for good to Finca Vigía in Havana, Cuba, with his third wife, Martha Gellhorn. By the way, Hemingway once dubbed Key West the “St. Tropez of the poor” and reportedly wrote (and patiently reworked!) portions of the following novels while residing in Key West: A Farewell to Arms, For Whom the Bell Tolls, Death in the Afternoon, The Green Hills of Africa, To Have and Have Not and Islands in the Stream. (Hemingway once remarked, “The first draft of anything is shit.”) Without further ado, here are some not-to-be-missed Hemingway attractions in Key West:

Blue Heaven
729 Thomas Street, Key West
An amazing Key West eatery, laid-back Blue Heaven features delicious cuisine (the lobster eggs benedict comes highly recommended!) along with its rich history. Formerly a dance hall, gambling den and bordello, the establishment also hosted cockfights and boxing matches refereed by none other than Papa himself. Be on the lookout for roaming chickens at the outdoor dining area! Be sure to get there early for breakfast or endure a lengthy wait!

Casa Antigua
314 Simonton Street, Key West
When Hemingway and his second wife, Pauline, first arrived in Key West in 1928 they stayed briefly at this location, which was then known as the Trev-Mor Hotel. The couple was waiting for the arrival of a new Ford Roadster from the car dealer located downstairs. Hemingway allegedly finished his 1929 novel A Farewell to Arms during this period. In addition, the couple fell in love with the island and decided to make Key West their permanent home. Note: The building is not open to the public.

Captain Tony’s Saloon
428 Greene Street, Key West
Captain Tony’s Saloon is billed as “the first and original Sloppy Joe’s Bar” and reportedly served as the inspiration for “Freddy’s” in Hemingway’s 1937 novel, To Have and Have Not. The bar was previously known as The Blind Pig, while the building itself was erected in 1851 and formerly served as an icehouse and morgue. Hemingway’s friend, “Sloppy Joe” Russell (1889-1941) owned the place and reportedly decided to move the bar to its present location on Duval Street in 1937 when his rent was raised from $3 to $4. According to legend, bar patrons simply carried their drinks with them as they casually strolled from the old location to the new bar. Key West legend Captain Tony Tarracino (1916-2008) later bought the bar. Captain Tony served as the inspiration for Jimmy Buffett’s song, “Last Mango in Paris” off his 1985 album of the same name. Highly talented singer-songwriter Tony Brehm recorded the amazing Live at Captain Tony’s Saloon here.

Dry Tortugas National Park
Dry Tortugas National Park lies nearly 70 miles west of Key West and is accessible only by seaplane (Key West Seaplane Adventures) or boat (Yankee Freedom). It is home to the Civil War-era Fort Jefferson, the largest masonry structure in the Western Hemisphere. Notable prisoners held at Fort Jefferson during the Civil War include Samuel Mudd, Edmund Spangler, Samuel Arnold and Michael O’Laughlen, who all had been convicted of conspiracy in the assassination of President Abraham Lincoln. Hemingway enjoyed many fishing expeditions to the Dry Tortugas during both his years in Key West and later in Cuba. During one memorable and harrowing adventure, Hemingway and his “Key West Mob” reportedly spend two weeks stranded at Fort Jefferson during a severe tropical storm.

Ernest Hemingway Home & Museum
907 Whitehead Street, Key West
Ideally located just a block from Duval Street, the Ernest Hemingway Home & Museum has been designated a National Historic Landmark. Some of the tour guides tend to embellish a few of the stories surrounding the Ernest Hemingway house, but that’s all part of the fun! Just enjoy the tour and take any of the “facts” you hear about the house with a grain of salt. Built in 1851 by captain, ship’s architect and salvager of shipwrecks Asa Tift (1812-89), the house was bought by Ernest and Pauline in 1931 at the cost of $8,000 (Pauline’s uncle Gus chipped in the money as a wedding gift). They lived here with their two sons, Patrick and Gregory. Hemingway created a makeshift writing studio on the second floor of a carriage house and connected it to the master bedroom via a walkway. In 1938, an in-ground, saltwater pool was added to the grounds at a cost of $20,000. Be sure to pet one of the dozens of polydactyl (six-toed) cats that reside on the grounds.

Key West Cemetery
701 Pauline Street, Key West
Although Hemingway is buried in Ketchum, Idaho, you can still drop by the Key West Cemetery and pay your respects to Papa’s fishing and drinking buddy, “Sloppy Joe” Russell (1889-1941). His tombstone reads, “Tho Lost to Sight, To Memory Dear.” By the way, Russell served as the model for “Freddy” in Hemingway’s 1937 novel, To Have and Have Not. As you wander around the Key West Cemetery, be on the lookout for such quirky inscriptions as “I Told You I Was Sick” and “Devoted Fan of Singer Julio Iglesias.”

Key West Island Books
513 Fleming Street, Key West
“If you don’t like to read, you haven’t found the right book.” Billed as “Key West’s Favorite Book Store since 1976,” Key West Island Books features an extensive selection of books by and about Hemingway, as well as first editions and signed titles. They also boast a superb collection of books about the Florida Keys and the Sunshine State in general. Prepare to spend an hour or two browsing in this wonderful bookstore.

Sloppy Joe’s Bar
201 Duval Street, Key West
A longtime controversy exists between Sloppy Joe’s Bar and Captain Tony’s Saloon over which bar Hemingway patronized. For the record, I personally believe he hung out at both bars! Sloppy Joe’s Bar hosts the immensely popular Hemingway Look-Alike Contest (just look for the horde of overweight, bearded guys drunkenly wandering all over Duval Street!) as part of the annual Hemingway Days celebration in July.