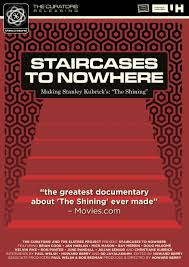 “Stanley was a perfectionist. He didn’t want anything artificial. He wanted the real thing.” If you are as obsessed with The Shining (1980) and the films of Stanley Kubrick in general as I am, you must watch Staircases to Nowhere! The 55-minute documentary directed by Howard Berry features fascinating interviews on the production of The Shining with Kubrick’s wife, Christiane, along with a number of people directly involved in the making of the film such as producer Jan Harlan, first assistant director Brian Cook, camera technician Mick Mason, post-production sound editor Ray Merrin, camera operator Kelvin Pike, second unit camera operator Doug Milsome, scenic artist Ron Punter, continuity supervisor June Randall and publicist Julian Senior. By the way, Kubrick’s daughter, Vivian, filmed a behind-the-scenes documentary called Making ‘The Shining’ (1980), which would make a great double feature with Staircases to Nowhere.

Struggle: The Life and Lost Art of Szukalski (2018)