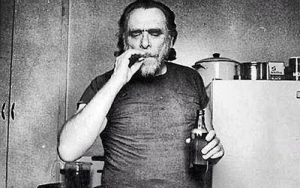 Description of Father: “[A] cruel shiny bastard with bad breath . . .”

Nonliterary Influence: Red Strange (aka Kid Red), a mentally ill tramp and derelict friend of Bukowski who wandered the highways and byways of America. Bukowski often plied Red with beer and encouraged him to relate his wildest stories, many of which ended up in Bukowski’s own poems and short stories.

On Solitude: “I was a man who thrived on solitude; without it I was like another man without food or water. Each day without solitude weakened me. I took no pride in my solitude; but I was dependent on it. The darkness of the room was like sunlight to me.” [Factotum, 1975]

On Work: “It was true that I didn’t have much ambition, but there ought to be a place for people without ambition, I mean a better place than the one usually reserved. How in the hell could a man enjoy being awakened at 6:30 a.m. by an alarm clock, leap out of bed, dress, force-feed, shit, piss, brush teeth and hair, and fight traffic to get to a place where essentially you made lots of money for somebody else and were asked to be grateful for the opportunity to do so?” [Factotum, 1975]

On Skid Row: “Those guys down there [in skid row] had no problems with women, income tax, landlords, burial expenses, dentists, time payments, car repairs, or with climbing into a voting booth and pulling the curtain closed.” [Factotum, 1975]

On Rejection Slips: “And rejections are no hazard; they are better than gold. Just think what type of miserable cancer you would be today if all your works had been accepted.” [Letter to Jory Sherman, April 1, 1960, included in Screams from the Balcony, 1993]

On Short Stories: “I do not believe in writing a short story unless it crawls out of the walls. I watch the walls daily but very little happens.” [Letter to Ann Bauman, May 21, 1962, in Screams from the Balcony, 1993]

On Hemingway: “Hem had style and genius that went with it, for a little while, then he tottered, rotted, but was man enough, finally, and had style enough, finally.” [Letter to Neeli Cherry, 1962, in Screams from the Balcony, 1993]

On The Beat Generation: “Now, the original Beats, as much as they were knocked, had the Idea. But they were flanked and overwhelmed by fakes, guys with nicely clipped beards, lonely-hearts looking for free ass, limelighters, rhyming poets, homosexuals, bums, sightseers – the same thing that killed the Village. Art can’t operate in Crowds. Art does not belong at parties, nor does it belong at Inauguration Speeches.” [Letter to Jon Webb, 1962, in Screams from the Balcony, 1993]

First Book of Poetry: Flower, Fist and Bestial Wail, 1960 (shortly after the publication of this chapbook, Bukowski attempted suicide by gassing himself in his room, but quickly changed his mind . . .)

On Drinking: “Frankly, I was horrified by life, at what a man had to do simply in order to eat, sleep, and keep himself clothed. So I stayed in bed and drank. When you drank the world was still out there, but for the moment it didn’t have you by the throat.” [Factotum, 1975]

On Personal Hygiene: “Nothing is worse than to finish a good shit, then reach over and find the toilet paper container empty. Even the most horrible human being on earth deserves to wipe his ass.” [Factotum, 1975]

On Politics: “I used to lean slightly toward the liberal left but the crew that’s involved, in spite of the ideas, are a thin & grafted-like type of human, blank-eyed and throwing words like vomit.” [Letter to Tom McNamara, July 14, 1965, in Screams from the Balcony, 1993]

On Luck: “I’m one of those who doesn’t think there is much difference/between an atomic scientist and a man who cleans the crappers/except for the luck of the draw – /parents with enough money to point you toward a more/generous death./of course, some come through brilliantly, but/there are thousands, millions of others, bottled up, kept/from even the most minute chance to realize their potential.” [“Horsemeat” in War All the Time, 1984]

On Death: “I want to die with my head down on this/machine/3 lines from the bottom of the/page/burnt-out cigarette in my/fingers, radio still/playing/I just want to write/just well enough to/end like/that.” [“suggestion for an arrangement” in War All the Time, 1984]

Cause of Death: Leukemia